Twenty six Mirror sailors travelled to Safety Bay Yacht Club in the damp chill of the early morning of Sunday 30th March 2014 to contest the final four races of the 2013-14 Western Australian Mirror State Championships. The first four races had been held at Maylands Yacht Club on 27th September 2013 so it had been a long wait to conclude the series and unfortunately five boats that registered didn’t make it to the second round. 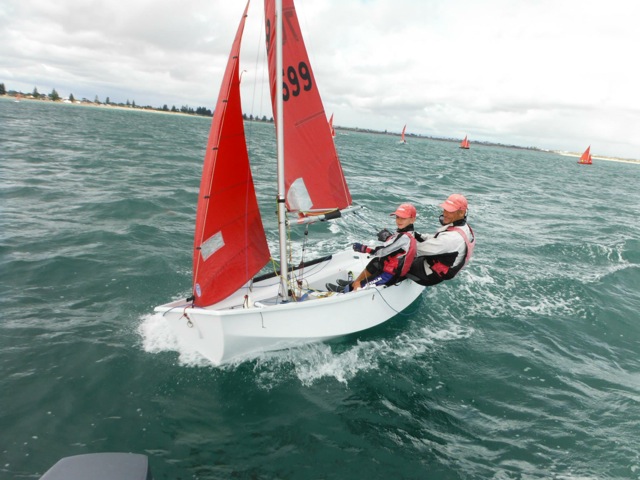 led the series on 10 points. In second place on equal points sailing ‘Bulletproof’ was defending State Champion Simon Barwood sailing this season with seven year old son Tyson as crew. In third place was the fleet’s most accomplished Mirror sailor, 2010-11 State Champion Liam Wilson with new crew Dylan Holthouse sailing ‘Game On’. Despite having little time on the water whilst working away in Kalgoorlie Liam had lost none of his touch winning two of the first four races and was looking forward to dropping a DNF from the first race.

The first surprise for the day was seeing David Pilbeam arrive sans son and crew Timothy but fortunately Richard Rowell had a surplus of one daughter so Matilda was seconded to V8 as David’s crew for the day. The second surprise was when a tractor emerged from the boat shed to tow boats 200m down the sandy track to the beach and the third surprise was on reaching the beach to be greeted by 18 knots of breeze, three times the amount forecast. The first cool conditions and rain for many months had sailors diving to the bottom of their kit bags to layer up and over the day several storm fronts like this one passed through interspersed by very light lulls in between to create a mixed bag of challenging conditions. After a short delay the first warning signal was made for Race 5 in a shifty 4-8 knot SWerly combined with a half metre slop from the same direction that would persist throughout the day. Shortly after the signal the wind shifted to the west and the consequent line bias meant the boat end was where the action would be. Game On made their intentions clear at the 1 minute signal luffing Bulletproof head to wind before taking up pole position one boatlength behind the RC boat. Bulletproof recovered just in time to return the favour and held Game On luffed as the breeze shifted back to the SW before bearing away on the gun to a clean start. Boats were piled up behind the RC boat and many including V8 were late over the line. Bulletproof held her advantage over the race and finished ahead of Alex and Tamsyn O’Beirne on Leading Edge IV with V8 having worked back through the fleet to finish 3rd. Game On fell away to 8th following some spinnaker problems and a capsize.

Bulletproof won the start again in Race 6 and was leading the fleet out to the left when the wind died almost completely on approaching the top mark. No one was making headway into the waves and the fleet sat bobbing around and waiting for wind for what felt like an eternity. Bulletproof finally tacked above the port layline and managed to just sneak past the mark before a north westerly shift increased the pressure to a welcome 2 knots and made the first reach another beat to windward. Game On rounded in second but well behind after having to tack again twice to reach the top mark with V8 in third. The course was mercifully shortened at the wing mark and positions at the finish were the same as the fleet headed ashore for lunch. After six races and with one drop now in play Bulletproof was ahead of V8 by three points with Game On another two points behind in third but was still in the hunt carrying an 8th that would disappear with the second drop. The start to Race 7 followed a similar script with Bulletproof getting away cleanly and leading all the way round to wrap the series up with a race to spare. Daniel Judge and Jonty sailing Bombora finished second with the consistent V8 posting her third third place in a row, Game On fell back to 7th after more spinnaker problems. Comeback of the series went to Sidonia Barwood and Rosie Rowell sailing Lollyhead who were dead last at the bottom mark but finished in fifth place. In the final race Bombora showed they were the most improved over the series by picking the first shift correctly and leading at every mark to finish first with Bulletproof second and Alex Thornton and Harry Osborne sailing Transom Note crossing third. Observing from a support boat the difference from six months ago was obvious to RFBYC Mirror fleet captain Geoff Wilson who commented “Seeing the boat handling these two (Simon & Tyson) demonstrated really hit home what all the coaches say – time on the water cannot be beaten. And it was very evident on Sunday.”